So there's less than 6 weeks until the release of the album and things are hotting up in the studio. I'm very pleased to say that "Soul Girl" is almost finished and features some amazing saxophone performed by the legendary Slap Johnson!

After hearing the scratch track last week, Slap was keen to get involved and had written and recorded the sax parts within 24 hours. Now that's what can happen with the right combination of talent, passion, hard work & efficiency. ( Note to self: must try harder. )
Posted by Marc Hamill at 15:09 No comments: 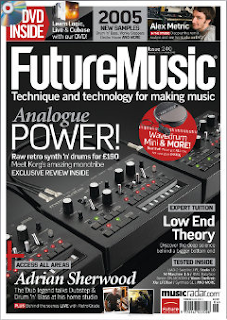 Yes! Love that old 'walking through the club' filtered intro trick and then before you know it you're in the thick of some dangerous Zapp-meets-Chromeo style goove-on. Man, that bridge at 2:16 really takes us back. Seriously 'classique' stuff.

We'd like a little more hi-end fizz in the snare & hats, but the buzzing bassline and searing lead sounds are bang on. And we just can't quite put our finger on that stuttered, treated female vocal effect in the choruses, except to say that it sounds tremendous. Speaking of vocals, we love both performances here. If anything turn up the male part slightly, it's hiding slightly behind the synths and it's a real up front performance that's heavy on the cheese, but all the more exciting because of it.

"My favorite part is the simple lead line in the chorus," says Marc. "it was the last addition to the track. I played around with lots of different chords, stabs etc, but that two line lead completely changed the general vibe and brought the whole song together." Smart move. It's slick, full to the rafters with ideas and brilliantly put together.

- Future Music Magazine
Posted by Marc Hamill at 10:04 No comments: